So these are my first impressions.

Right, so I cancelled my NS2 preorder once Matt "flipped the switch" early, because I didn't want to wait around for Apple to decide when the preorder should go through for me. Went back to the NS2 page and purchased it outright. Hard part over?

Then, I had trouble with my Files app, namely with this bloody error... 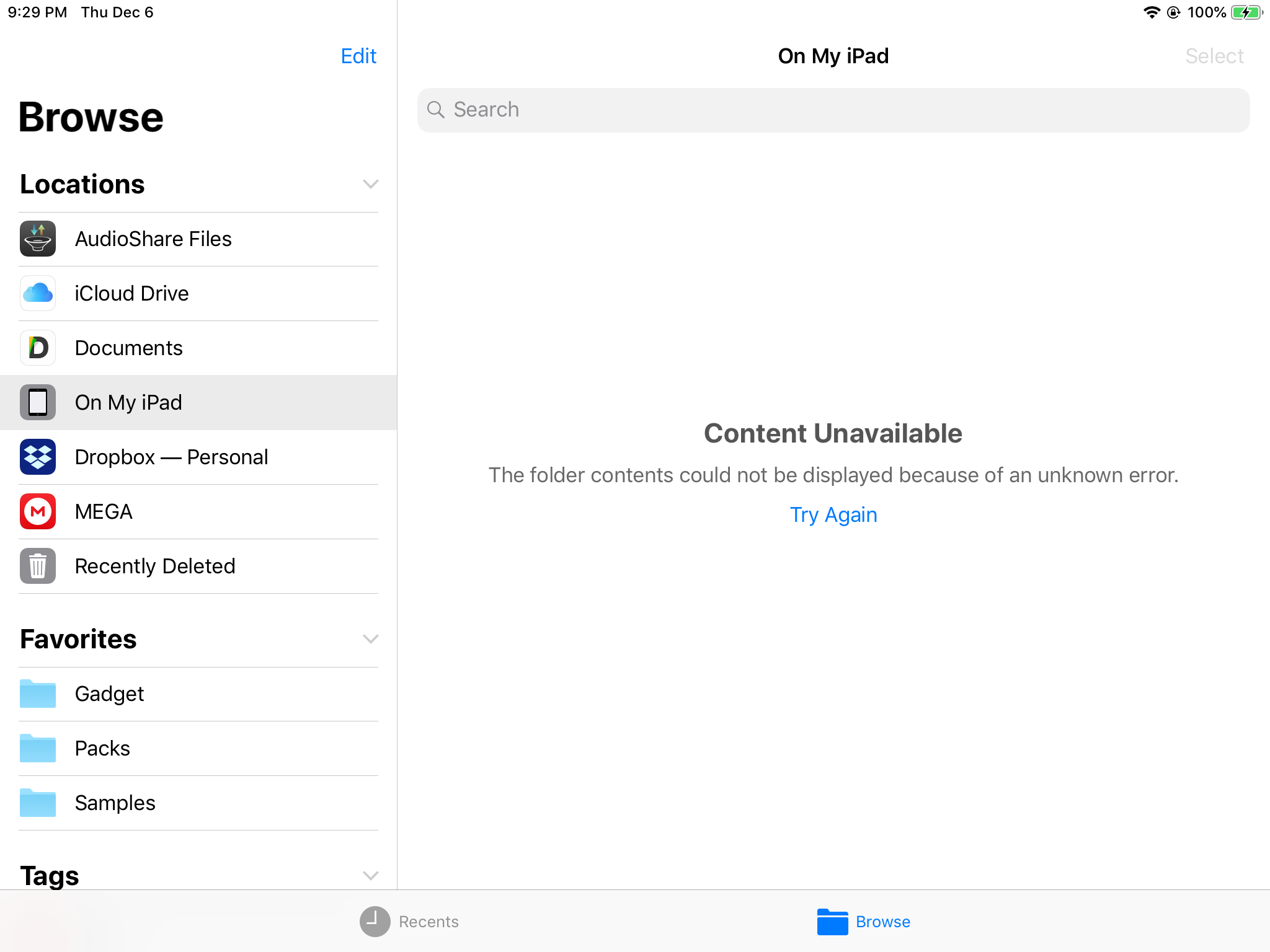 At first I thought Nanostudio 2 was causing it, which perplexed me as I thought Matt programmed everything to be solid. However, after 2-3 hours of buggering about, I found out it was actually iZip Pro what was causing the issue. After sorting out that bollocks and finding out Matt DID program everything to be solid, it was onto finding the folder to dump my samples into. I stayed up until I finished this task. Reminded me of my days at uni where I'd stay up past 4 to finish various tasks prior to class the next day. I'm impressed with the file organization within NS2 and the Files app compatibility. Bloody ripper.

Once I woke up, I had a play about with NS2. I didn't read the manual yet to see how deep the app goes. I simply explored, which came quite easy to me given the straight-forward workflow. It's easier than FL Studio, even with the temporary lack of audio tracks.

Then I purchased all of the IAPs to help support Matt and for extra sample-based patches. My interest laid mostly with the acoustic ones. Most of the sounds included in the packs sound excellent, but the selection is a little lacking. For instance, I hoped for a harpsichord patch for a Baroque-styled instrumental without needing to resort to using any AUs. Also, I wouldn't mind more variety in the rock guitars.

(NS2 request 1 - in the upcoming convolution reverb, besides a plethora of plates and halls, could you also add a plethora of IRs that simulate a neverending variety of amps and cabs? I can create a "clean e-guitar sound" via FM synthesis no problem and then shove it through an EQ-3B or two for tone shaping, the Waveshaper for distortion, and then select from hundreds of amp/cab IRs in the convoverb for the particular sound I want. If "amps and cabs" require a separate IAP in order to add them into the convo reverb, so be it.

Then I explored Obsidian's functions. My mind is literally blown with all that I can do within its infrastructure. The sampler alone blows my mind, especially the spectral loop mode. The FM works better than I expected. Most everything exceeds my expectations as a matter of fact. Although again, there is one thing that I wished Obsidian had - the ability to import our own wavetables.

(NS2 request 2 - let us import our own bloody wavetables, lol. The ones included are excellent though, but I have several of my own just laying about collecting dust.)

The built-in effects mostly leave me wanting nothing external. The new EQ-3B reminds me of a miniature version of Pro-Q2. The compressor runs smoothly. Most AU developers overlook the need for a Bass Bypass knob in their chorus/flanger/etc AUs, but I'm glad Matt included it. It's the trick I used to use in FL Studio to widen vocals subtly on top while leaving the low to mid frequencies alone. The only thing missing is a transient processor, but in the meantime I have the FAC Transient AU and the expander mode in the compressor.

So, given I needed some world sounds in NS2 (and a bloody harpsichord, lol) and didn't want to bugger about with the Beathawk AU, I hopped over to dskmusic.com to donate $25 to snag his samples in SFZ format. Victor is a good friend of mine I've known for several years, and I've used his free VSTs (which contain the same samples) in many productions back in my FL Studio days. Here's one such example using a few of said free VSTs quite extensively....

Now I know Obsidian doesn't support SFZ, but it supports .wav files. The SFZ files can be read in any text editor and can tell me which sample goes where so I can "build my own damn patches".

Building these DSK instrument patches in Obsidian is second nature to me.

With all of this said, I LOVE NS2. It is a sound-designer's wet dream come true. I know I do have a couple of minor nitpicks as mentioned above, but overall this solid app pretty much has most everything I need.

And in case you wondered, I ditched Gadget and its related apps at last. After the whole Premiere Vintage Organ fiasco, I saw no sense in carrying on with Korg any further while having those apps take up my limited 128gb storage space.